Mold making is an almost magical process. I mix chemicals, pour them on a thing, and then just like that, I have a 3D stamp that allows me to reproduce the thing in almost any material I want. It’s like photocopying in 3D, except that it has an added level of transformation that alters the original in all sorts of interesting ways. Casting a hollow form in silicone to make a creature mask is very different from making an edition 50 hard resin art toys, both in purpose and experience. My background is in printmaking and photography, so mold making has felt like a natural extension of my early work.

I always enjoy reading about other people’s process, so I thought I’d share some of my own. Here’s some information about what went into the creation of the Gwilliam Finger Puppets. You can buy them online for a limited time and have a creepy cutie of your own! The finger puppets and other prizes are helping to raise money to cover production costs for Brian Lonano’s upcoming short, Gwilliam–a gross love story between man and goblin, starring William Tokarsky of “Too Many Cooks”! It’s going to be weird and awesome–check it out and SUPPORT GOBLIN LOVE <3 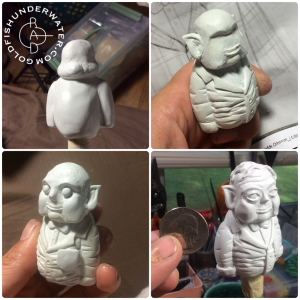 1)   I used Magic Sculpt to build the original puppet in layers. It’s an epoxy clay–a chemical cure material that changes consistency over the several hours it takes to harden.  I made the core by squishing clay around my gloved finger, sculpting the details in layers after the clay cured.  After setting overnight, the clay can be sanded and drilled, which allowed me to both add and take away throughout the process. 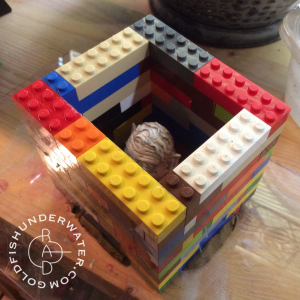 2)   Once I finished the sculpt, I sealed it, created a base using WED clay, and built mold walls with Legos. I poured rice into the form to measure how much silicone (Mold Star 16) I needed for the block mold. I made mold keys by pressing into the clay at the bottom of the box, then sprayed it with a release.  After mixing the silicone, I degassed it using a vacuum chamber, which forced out most of the bubbles that cause imperfections in the mold. 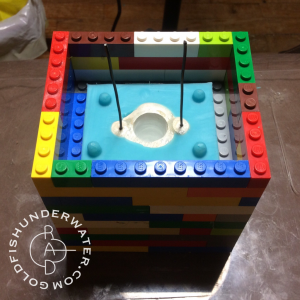 3)   After the first part of the mold cured, I turned it over and built new Lego walls to form the outside of the core mold. This half shapes the inside of the puppet so you can stick your finger in it! I drilled holes into the bottom of the puppet and inserted 2 metal rods. These created bleeders in the final mold–small holes for excess chemicals to be pushed through during the casting process. This ensures that the casting rubber reaches all the details. 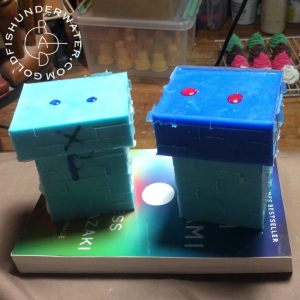 4)   To cast in the finished mold, I began by preparing it with release spray and baby powder. The baby powder helps draw the rubber into the details, minimizing bubbles in the surface of the casts. I cast the Gwilliams using Simpact 60A, a urethane rubber.  I determined how much rubber I needed per cast by pouring water into a measuring cup, placing the original puppet inside, and then subtracting the difference in volume. I premixed the A and B containers before measuring out what I needed. The chemicals have a 6 minute pot life, so it’s important to work fast. I tapped on the mold as I poured to help dislodge any potential bubbles. After filling the first half of the mold to the brim, I pressed the second half down into it. I could tell that the chemicals made it to the top by watching for puddles formed by the bleeders at the top of the mold. 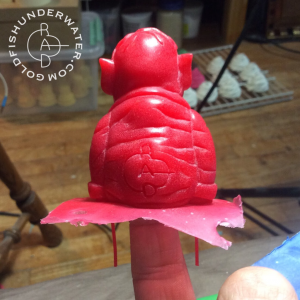 5)   The rubber I used cured enough to handle after about three hours. The demolding process took some force. I pried the mold walls away from the cast and then pushed the bottom wall up to dislodge Gwilliam’s head. After the initial push, it separated easily. The cast came out with a flange formed at the seam where the mold separates. This could be trimmed easily with curved scissors. 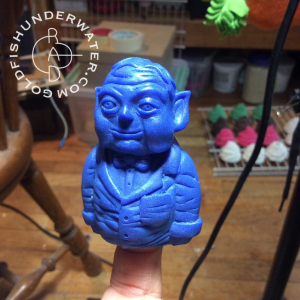